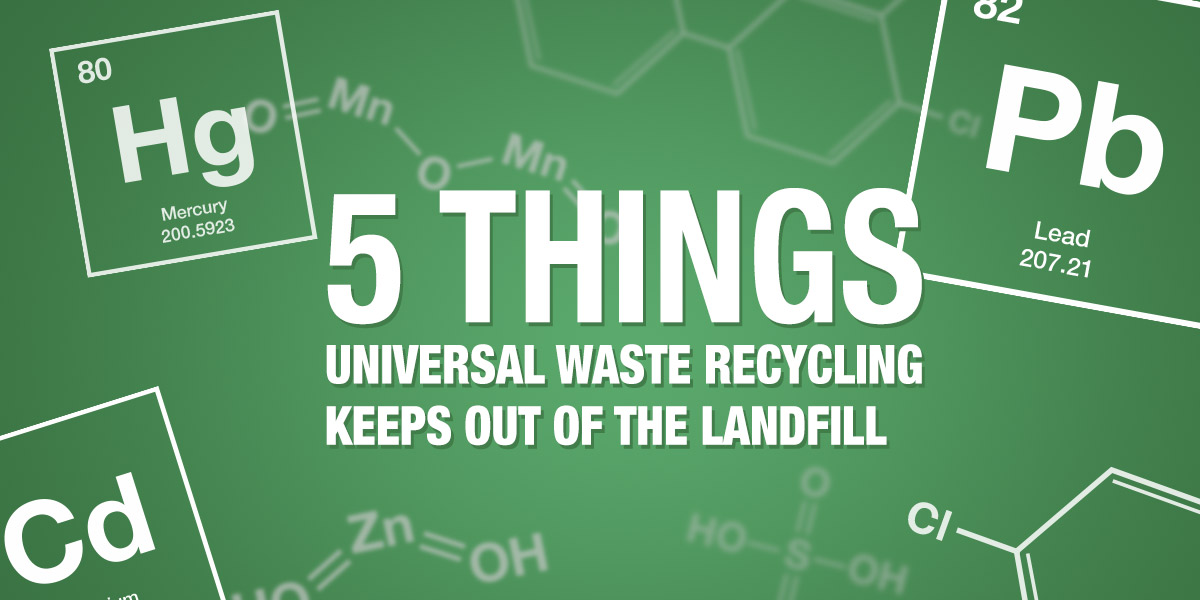 Mercury is found in a number of universal wastes that you recycle. It can be found in fluorescent lamps, mercury containing devices, and even some button batteries. Improper disposal of these wastes can cause contamination of our water supply. Mercury can end up both in the drinking water and in fish, where it can ultimately be ingested by the human body. Mercury is a bioaccumulate which builds up in the body over time without being able to be naturally expelled and is toxic to our nervous system, digestive system, and immune system. It is considered by the World Health Organization as one of the top ten chemicals that is a major public health concern.

Lead is found in most circuit boards and is very common in most universal wastes including E-Waste, certain batteries, and electronic ballasts. As electronic and battery waste only continues to grow so too does the amount of lead entering the waste stream. Lead is also a bioaccumulate which can be inhaled or ingested where it can negatively impact our nervous system, liver, kidneys, and other organs. It is particularly harmful in young children where it can negatively affect cognitive development.

Lead and Mercury are considered toxic heavy metals, but there are other toxic heavy metals present in batteries and electronics. Other toxic heavy metals include cadmium, manganese, zinc, nickel, and arsenic. Generally, these metals or metalloids end up contaminating our water supply and have various toxic effects in the human body, impacting our nervous system, other organs, or even causing various cancers.

Polychlorinated biphenyls or PCB’s are toxic compounds that are slowly decreasing in the waste stream. These compounds were once very common in the capacitors of lighting ballasts and were banned in 1979. There are still PCB ballasts recycled every year as old lighting fixtures are replaced. PCB’s are known to cause adverse effects in humans, fish, and birds. PCB’s are also considered carcinogenic.

There are positive even valuable components recovered and reused as a result of recycling universal waste. E-Waste holds the greatest potential for recoverable assets. There are precious metals such as gold, silver, and palladium. There are also other metals which can easily be reclaimed such as copper and aluminum. According to a study published in Environmental Health and Science it is now more cost effective to recover these assets from E-Waste than to try to mine them from the earth. Looking at gold alone there can be as much as 70 times more gold in a ton of E-Waste than a ton of earth at a gold mine.

For more information about universal waste
or to start your recycling program contact us
877.822.4733
info@nlr-green.com